← No Pictures, Please
This is Argentina (TIA) →

Maxi and I entered the bus station in Carlos Paz as two dirty, smelly, and exhausted backpackers.  We were resigned to take the first bus that would get us closer to La Rioja (our chosen New Year’s destination) that we could find.  Bus stations are a bit disorganized in Argentina though.  I guess I don’t have much grasp of a Statian-modeled bus station to compare them to but I suppose if I were to take a bus in the States I’d search for a Greyhound time schedule online.  It’s not super common there to take buses cross-country, at least from what I gathered during my first 19 years of life in the USA.  It is here though.  Argentina is the eighth largest country in the world and, with almost 40% of the population living in Buenos Aires Province and the rest scattered across the varying land of the nation, there’s a high demand for long-distance bus travel.  I’m getting off topic though. 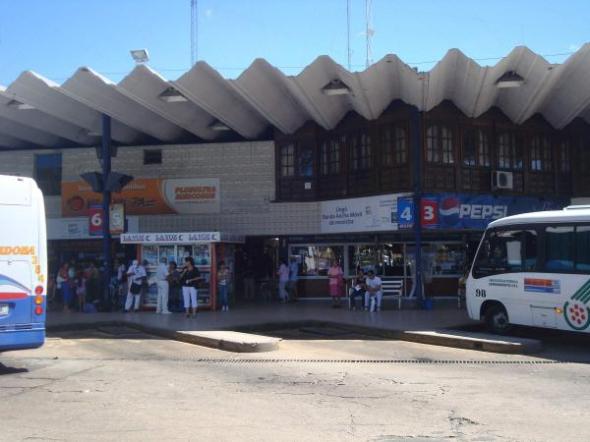 The majority of bus stations are set up in cement buildings with several different “booths” for each bus company.  Walking in you might feel kind of like you’re at a mall or a strange type of market.  Each company runs their own business and uses their share of the platforms.  It isn’t like looking up airline tickets online and finding the cheapest company.  You have to go ask each separate bus company for a list of their times and prices, so it takes a bit of research if you’re not really sure where you are going except “north.”  Sometimes, when you purchase a ticket they just give you a slip of paper with no time or platform number or destination.  You are, at that point, responsible for figuring things out.  It doesn’t seem very secure to me, and I think Maxi was a bit frustrated by the lack of organization too, but hey, TIA (This is Argentina.) 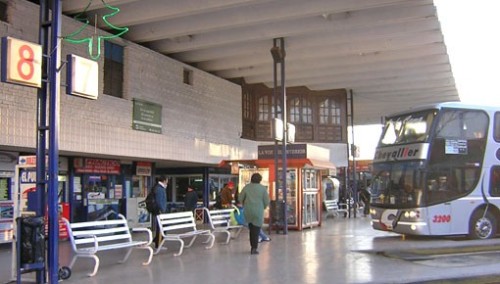 Luckily, Carlos Paz’s bus station wasn’t too huge.  First I went to bum a more detailed map of the area from a tourist booth.  I actually ended up in a 30-minute conversation with the student intern there.  He was studying Chemistry in Cordoba and really interesting to talk to, giving me some advice about where to stay in La Rioja, suggestions for what to do, and how to get there.  After talking to him, I asked a couple of companies for schedules while Maxi guarded our things.  I found out that there was only one company that would take us north this late in the day.  It was $50 pesos per person, though, just to the point where the route changed and headed to our chosen city; that was 5000% more expensive than hitching a ride, ,more even.

We discussed it, were kind of irritated, but eventually decided that we didn’t really want to sleep in the bus station and preferred to at least get to a vantage point where we could hitch a ride.  Eventually, we settled on tickets for halfway to the turn off, meaning we’d be on the bus for about an hour and a half, get halfway there and then go camp in Capilla del Monte.  We waited for the bus to get there (at around 7:30 PM.)  I practiced the guitar while Maxi searched for honey roasted peanuts and raisins—he couldn’t stop craving them after the excellent choice of snack food I’d offered on our first hitch hiking ride in the Fiats.  But he came back empty handed and we got on the bus hungry, sleepy, and in need of showers. 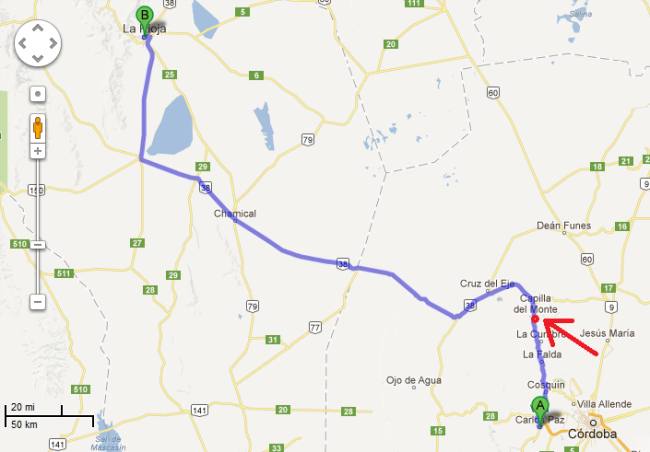 The bus decided they didn’t have enough people so they waited in the terminal another thirty minutes to see if anyone would join in.  Max wasn’t the only one frustrated with the system but we were both at least glad to have cushion-y seats.  No one else got on in the next half hour as it began to get dark outside.  We’d probably have to find a hostel once we got to Capilla del Monte instead of camp, definitely exceeding our daily budget, but oh well.  We finally set off and it wasn’t five minutes before I got bored of taking funny pictures of Maxi snoring and joined in on the Z’s. I woke up disoriented and a bit dizzy. 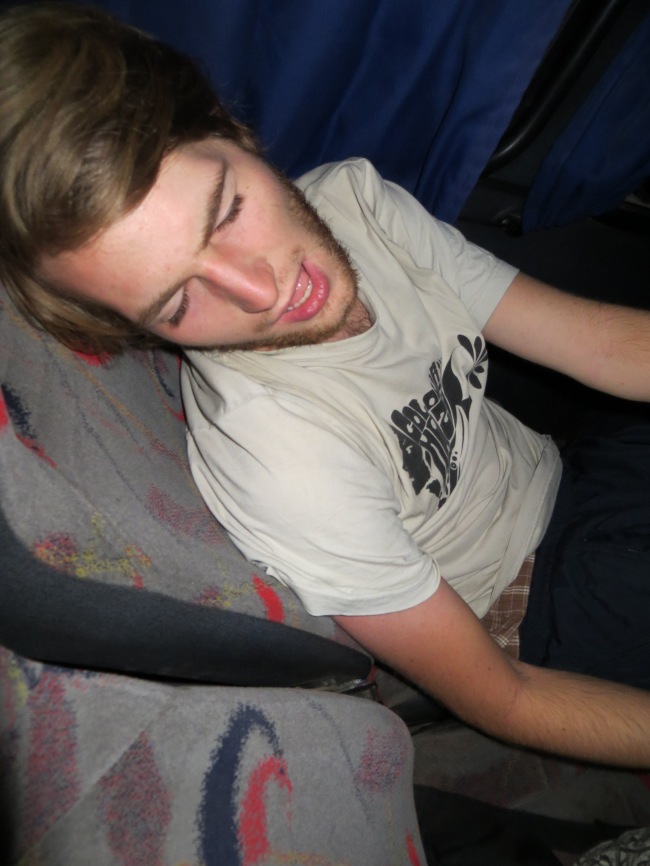 The bus seats were so much more comfortable than anywhere I’d slept in the last few days and I had slept long and hard.  Only problem was, I’d slept long and hard.  I quickly woke Maxi and asked him what time it was.  We assumed the bus driver would have told us when to get off since we’d only paid for half of the journey…but it had been an hour and forty five minutes since we’d dozed off.  We were both kind of panicked.  If we were at all accurate in our calculations, we’d missed our stop.

There were more people on the bus now, even though it was still largely empty.  I turned to the people next to us, who also looked like stinky young travelers with a thirst for adventure.  They said we hadn’t missed our stop, that it was the next one, but were naturally interested in where we were from and where we were going so we started chatting.   That’s how we met John, Braian, Juan, and Cynthia.  They were all from different parts of South America backpacking around and making enough to move from destination to destination by doing malabares (juggling and street performances) at street corners or traffic lights.  They asked us what we were doing in Capilla del Monte and we responded that we were trying to find something cool to do for New Year’s.  In less than five minutes we were invited to spend New Year’s with them; we could just stow-away on the bus for an extra half hour and get off in Cruz del Eje.  They were meeting some friends there and were going to go to a little mountain pueblo called San Marcos Sierras to hang out and spend New Year’s there. 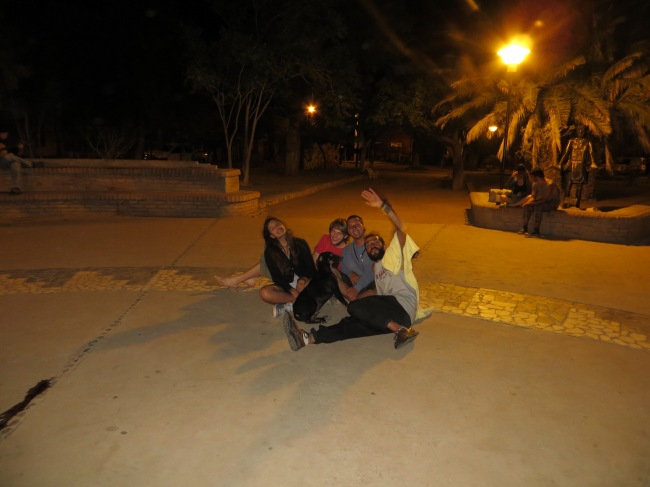 Maxi and I just looked at each other and grinned.  This was the feeling I loved about this trip.  I very rarely felt unsafe or that things would not work out.  The phrase, that we’d repeat whenever we were worried about getting stuck somewhere or things not working out, “Siempre tenemos suerte”, (We are always lucky) was born in this moment.   I can’t even explain how things just seemed to fall perfectly into place while we hitchhiked through the north.  They just…did.  Yes, we had our fair share of rough nights, but things always seemed to work out like this.  Don’t know where to spend New Year’s?  Well, let’s just relax about it.  Sure to find something.  And that we did. 😉  We decided to tag along with these random kids we’d just met to Cruz del Eje.  The bus driver didn’t even blink an eye when we got off a half hour later than what we’d paid (he probably would have taken us all the way to Bolivia without noticing…)

San Marcos Sierras turned out to be one of my top three favorite places we went during the trip.  It wasn’t so much the place as the people and the things that I learned.  I’ll tell you why next time because I’m procrastinating on studying for my Management midterm, but I’ll write soon!  No promises this time, since I tend to break those 😉

I love words; my name is made up of real words, even. I am studying Global Tourism and Spanish with a minor in Business Administration at Colorado State University but this year I chose to study abroad in Buenos Aires, Argentina. That's why this blog was born--to keep my beautiful family and friends informed of my whereabouts, thoughts, accomplishments, and mistakes.
View all posts by Autumn Standing »

← No Pictures, Please
This is Argentina (TIA) →