Oh my gosh you guys it’s been such a long time!  I didn’t realize how much I missed having my own computer and my keyboard.  It’s wonderful.  I really missed writing on my blog too, and although I kept a journal, it is oh so nice to be able to keep up with my racing thoughts on a real English keyboard.  As you may know, I got a crazy (and turns out I was pretty crazy, looking back) urge to up and go hitch hiking around Argentina and Bolivia.  After that, Carnaval in Brazil, with one of my best friends from the United States, Marketa, would be my cherry on the ice cream.

^^This is a map of the route I took.  The red is by hitchhiking/bus and the blue lines are flights that I took to get to Brazil/back to Buenos Aires.

Ok, I was already in Argentina so that technically doesn’t count as a third country, but the capital (Buenos Aires) is very different from the rest of the country and I learned un montonaso more about the culture.  That doesn’t mean it wasn’t without difficulties.  I’ve found myself literally sitting in a fire (yeah, that pair of jeans is gone) to keep warm, miserably trying to pretend I didn’t exist with one of the worst migraines of my life getting salmonella in Bolivia, and trying to sit down with the most crisply burned butt I’ve personally ever witnessed in Brazil.  Photos are below. 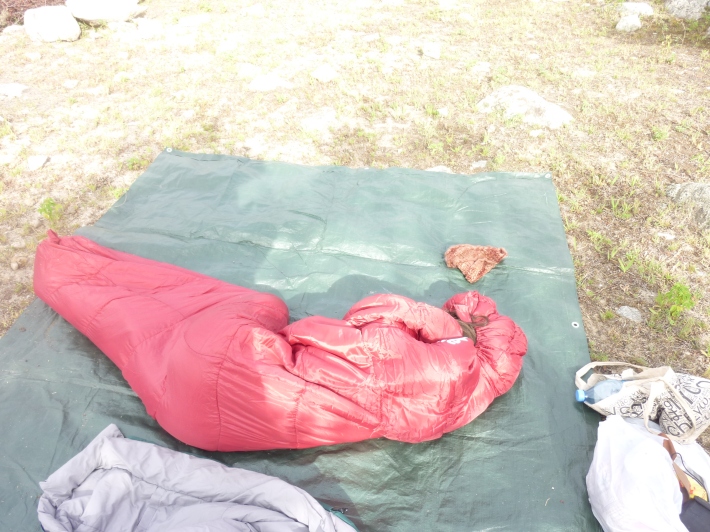 ^^I don’t have a picture of my burned jeans but this is a picture of the resulting decision to finally buy a sleeping bag.  This night (in Tafí del Valle) I still froze, but much more comfortably and without the crying or burned clothing. 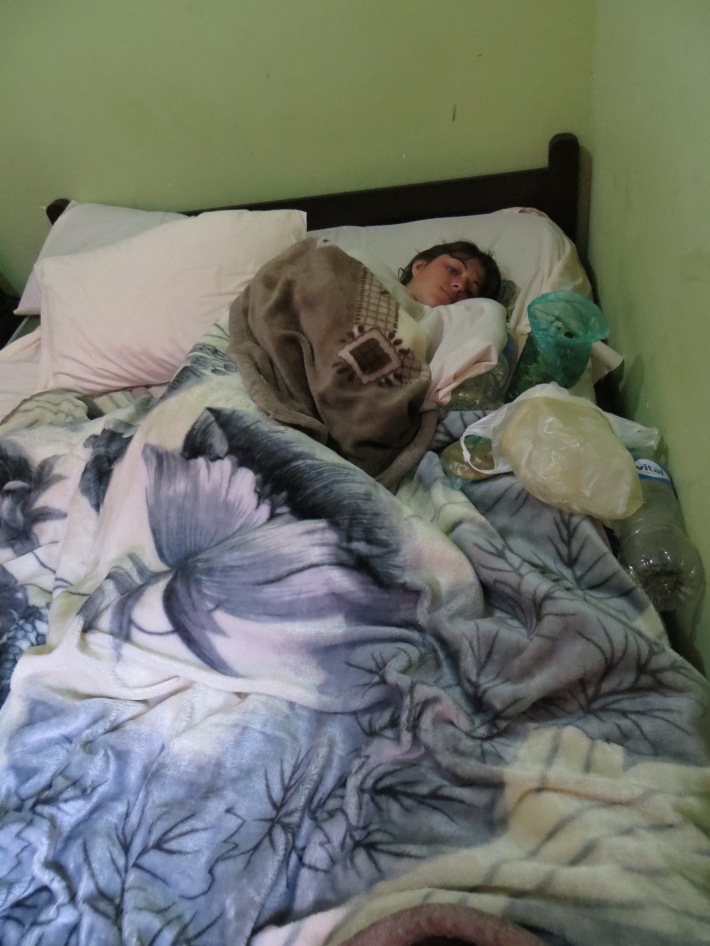 ^^I was sick for nearly two weeks.  This was in Sucre, a city I didn’t even really see because I spent the entire time feeling miserable in the hostel. 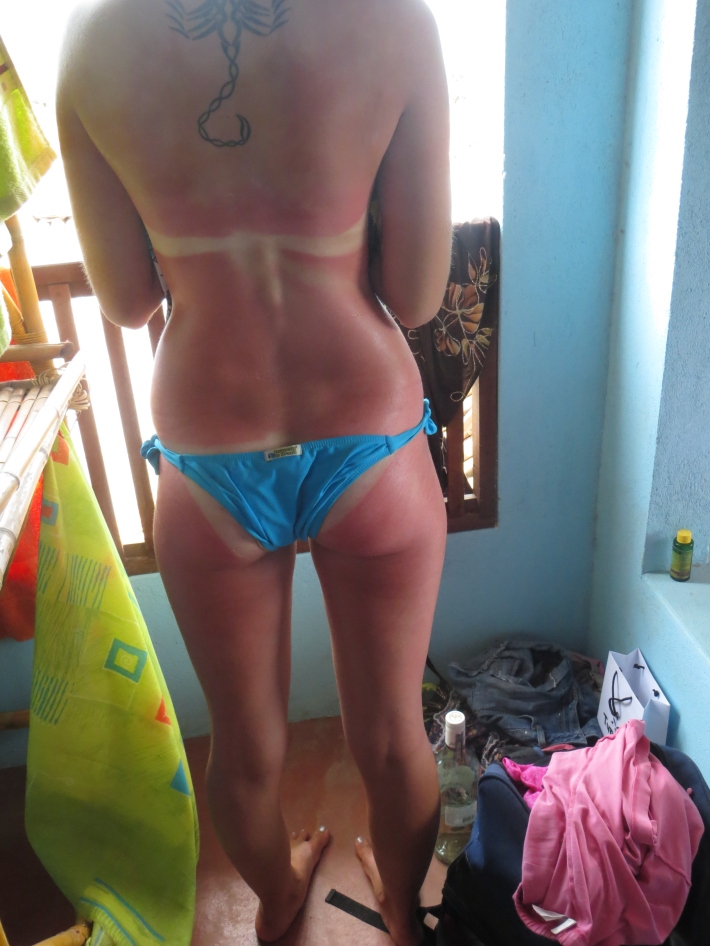 ^^I am the biggest idiot in three states 😦  Right now I feel like a snake that’s shedding it’s skin–the way I’m peeling right now, despite the pounds of lotion Marketa and I applied every two hours, is positively frightening.

I saw some incredibly beautiful places and met some amazing people.  I learned more than I would ever have thought about myself too.  But by the end of the sixty-seven days of traveling, I was more than ready to go back home to Buenos Aires.  I could have never imagined how much this city would feel like home to me…I mean, I was so happy to be home and see my family and friends that I only slept three hours the first night despite having endured a nineteen hour flight/travel/connection fiasco in three different languages to get here.  On the ride home from the airport (an hour through solid city),  I was just as awestruck and excited as when I took the same journey six months ago, but this time not so much by the tall skyscrapers and billboards in Spanish, but by myself and my own attitudes.  It wasn’t so foreign and new and interesting, it was home.

This time I was comfortably chatting with the taxi driver in Spanish about tourism, dangers of the city, benefits of traveling, what his daughter was studying, cool places to see in Brazil, etc. while enjoying some medialunas and a cafecito from the most Statian of food chains.

We passed the Burger King on the corner of the block before mine and my stomach fluttered.  I felt so silly being so excited about coming back to the city I’d only lived in for five months.  How could I feel so at home here after such a short time?  When I walked into my apartment building the first thing that hit me was the smell.  I feel so cheesy and dramatic writing this but I’m not kidding, the smell just made me smile.  It’s not a bad smell or anything like that at all, it’s just the smell of the apartment that I never noticed until I left and it gave me an instant feeling of comfort and contentedness.  I gave my host mom a big hug and we talked for a few minutes about how our summer’s had gone and how excessively worried she was about me while I was deathly ill in Bolivia (sorry.)  Then my host brother, Guillo, got home and I gave him the magnets I’d been collecting for him from all of the places that I’d visited.  Those were the only souvenirs I’d bought on my journey, which I kind of feel guilty about, but I was strapped for cash and couldn’t buy everyone a little something…so no one got anything really.

The butterflies in my stomach didn’t go away. I went to my room, shoved my bags into a corner, turned on my laptop ❤ and listened to some music that I’d been missing all summer (the 1,000 songs on my mp3 player surprisingly became incredibly redundant after the first month, and almost unenjoyable by the end of the viaje.)  After I was half satisfied with the music and felt overwhelmed with love trying to answer all the messages on my Facebook account, I decided that at 3 in the morning I should probably be going to bed.  I walked into my little bathroom, pulled the shower curtain around me and the toilet and rediscovered that water pressure and hot water are magnificent luxuries.  I wanted to hug the shower head…but I wasn’t tall enough.  To top it all off I slipped into my OWN soft bed with clean sheets, freshly showered and wearing clean pajamas—not the dirty, nasty ones that smelled like campfire I’d been spraying with VS Mango Temptation to avoid washing all summer…  You’d think I’d drift off to sleep in an instant but I just couldn’t.  There were so many things to look forward to—seeing my friends again, getting my smartphone back (Otto’s a genius), picking my classes for next semester, eating milanesa de soja—I just couldn’t relax.  I eventually slept but at eight in the morning I was ready to take on the world again; instead, I just downloaded the 5 new episodes of Shameless I’d missed and sat watching them eating some toast with dulce de leche.

When I saw Sol later that day (after lots of hugs and such), I found myself realizing how long I’d been gone.  It’s impossible to summarize everything that I did over the summer and even though she could give me a quick recap of the major things that happened with her, there was just too much to tell.  It’s the same here on this blog, guys.  I seriously wrote over 100 pages in my journal.  I don’t know how to fit all of that into this blog to share with you but I’m going to try little by little over the next week.  I’ll start from the beginning and try to post things during this last week of break I have.  The problem, you should know, is that it’s going to take a lot of motivation and effort on my part to post about that much so bear with me and give me some support so I don’t get lazy and stop posting. 🙂

Love you all so much and I’m so happy to be home!  To all of my friends and family back in the USA, I should be on Skype fairly often for the next week or two just to catch up with you all.  PLUS, I can text now because I have my smartphone back and a pretty constant connection to wifi.  To hold you all over in the meantime I’m sharing my Facebook album with like 250 pictures from over the summer (all out of order cuz Facebook is dumbbbb.)  Enjoy!

I love words; my name is made up of real words, even. I am studying Global Tourism and Spanish with a minor in Business Administration at Colorado State University but this year I chose to study abroad in Buenos Aires, Argentina. That's why this blog was born--to keep my beautiful family and friends informed of my whereabouts, thoughts, accomplishments, and mistakes.
View all posts by Autumn Standing »